It’s our first match of 2015 at our traditional home venue of Parliament Hill and who better to share the pitch with than our best pals the Players.  Roger is busy working today so Ghost has the honour of captaining our visitors and correctly guesses whether Her Majesty is kissing the turf or blinking in the sunlight and having taken a recce of the “result wicket” took the decision to insert the Gardeners.  Captain Higginbottom sends out reliable openers the two Daves to bat and puts his feet up expecting a calm opening.  Not quite as the Whitley Bay Champion failed to intercept a straight ball from Jez Langridge and the skipper finds himself effectively opening.  Shortly after 2-Bats nicked one and Jeff and Richard need to shore up.  Jeff crashes an early boundary whilst Richard adopts his “they shall not pass” attitude.  Another couple of handsome shots by Jeff are then consigned to history as an almighty heave across a good ball sees his timbers rearranged.  Sachith’s now in and looking very good, hitting some powerful shots and Richard starts to settle until a shooter from Bennett does for him.  Matt got one very early that also stayed low and now looking a bit perilous.  Stuart continues his fine early season form and trades blows with Sachith – a superb six over mid off sticks in the memory – until Sachith got castled.  Mike worked well with Stuart until the South Coast slammer charged down the track at Ghost and was stumped.  Mike and Ashwin played very calmly, getting us up to around 120 until Mike gave a return catch to Ghost.  Tarun supported Ash until Tom Hickox bowled him and now we need a decent last wicket stand to post a good target, though maybe 125 is OK on here.  Ash was by now getting his feet and bat into perfect position and playing some neat strokes, a sublime off drive and a classic late cut going for fours, as Gopala applied some power gaining a dozen runs in tough circumstances as the ball failed to bounce much.  This gave the captain the luxury of declaring our innings on 171, mainly because the Players 8 bowlers had sent down 45 overs and deserved some tea.

Can we defend this total?  We have a good bowling side and a ropey wicket in our favour.  Richard ‘Jabba’ MacKay crashed away two fours in the first over and it looks like we’re in trouble … but Gopala likes being thrashed to the boundary as much as most fast bowlers and adds some extra pace to one that stayed low to account for Jabba.  Stuart is not to be outdone and skittles Young in his first over and we’re now in the box seat.  The captain warned that we had a similar start in this fixture last year and then the Players put in an 80 stand.  Started to look this way today as Yates and Scott fended off some high quality bowling with consummate skill.  We changed the bowlers to Dave Stead and Tarun, who put in tidy and economical spells though the wicket chances were limited.  “What do you reckon?” Stuart asked Richard; “I’m bringing on the Wicket Machine” replied the captain, handing the ball to Sachith.  Instant success, as the Hemel Hempstead Hammer castled Yates.  Nick Beake came in and decided to run on everything, hitting the ball straight to Gopala who ran out Scott for a very good 32; key turning point we figured as this had been a fine innings.  Gopala shortly after trapped Nick lbw for a duck, Sachith bowled Davies for 1 and now we need to maintain this momentum.  Pas-de-probleme as Mike bowled Tom Hickox and the Ashes urn is firmly in our sights.  Sturdy resistance – and some good shots – by Bennett and Langridge put the brakes on us until Sachith bowled them both and shortly after completed his five-for – all bowled – to give the Gardeners victory.  Man of the match indisputably Sachith, but Ash’s contribution with the bat to set a tough target very well worth a mention.  Thanks as always to the Players for some great cricket and excellent sportsmanship. 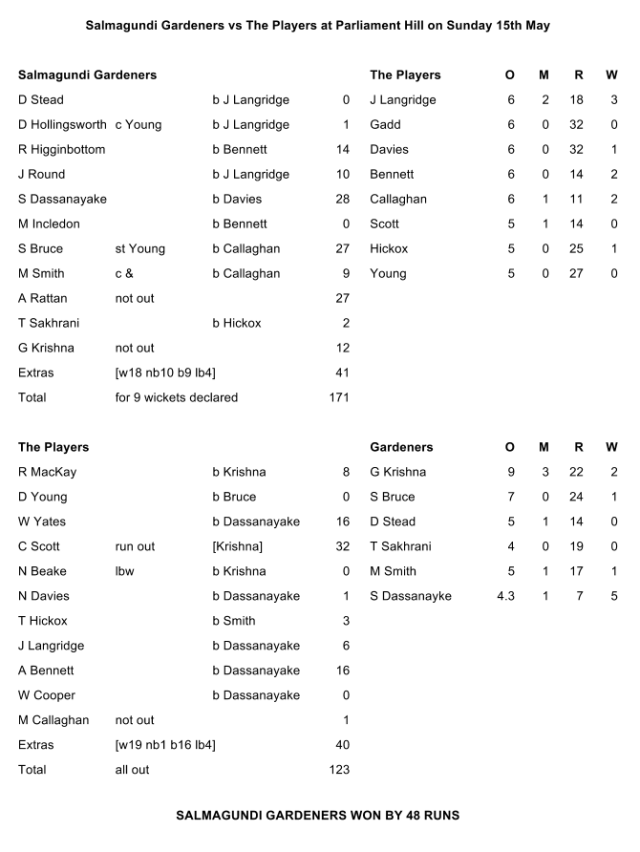