A curious fact: the cycle route between Stevenage and Luton is a beautiful 11 mile stretch of undulating English countryside; the Gardeners captain found that out when he rode across to pick up the tourists’ transport for the weekend.  We had a remarkably uneventful ride up to Holkham from Stevenage: as Higginbottom heads East he loses his tendency to get lost (West of London has always felt somehow wrong).  The weather has dried the pitch out pretty well – locals Adam Wood and Jason Amesbury joined us at the ground – we have a full team ready to play.

Richard called incorrectly and Holkham captain James Harrison elected to bat.  Gardeners Vice Captain Stuart Bruce advised that we shouldn’t be attacking too much  early on owing to a couple of hours inactivity in the minibus – wise words – but star opener Joe Woolmore contradicted this with his first 3 balls homing in on the stumps like a guided missile, the third one bowling Sean Patchett (a most proficient batsman who took 50 off us to win a game for his Motley Crew team in 2017).  Opening partner Shahed Ahmed was not to be outdone, bowling James Holden for 5 to give us a great start.  4 of Joe’s opening 5 overs were maidens and Shahed only gave away 17 runs in his first 5, so we were in good shape as Stuart and the multi-talented Tim Clamp (musician, teacher, rugby referee, cricket umpire, pork pie connoisseur) took up the attack.  Will Bale and Matthews loosened the grip a bit though the bowling was high quality and backed up by some committed ground fielding, typified by Jeff Round who also collected a rocketing off drive to dismiss Will for a handsome half century.  Debasis Mohanty also managed to effect some control and Jason had a number of lofted shots being just out of the range of our fielders as M Todd helped Matthews to accelerate the run rate, put in check again by Debasis making a solidly hit return catch look easy.  Joe returned to frustrate the final push for runs, the home team posting a healthy 189 for 4 at the end of their 40 overs.

Tea was excellent – thanks again to our hosts.  Paul Jordan opened with Shahed, the latter gaining the unwanted distinction of being our first wicket lost of the weekend having hit a four just before playing on.  Debasis then demonstrated some true class with imposing shots all around the wicket; a straight six off a good length ball on middle stump was astonishing.  Paul rotated the strike and was a very effective support act to the Debasis Show – 70 put on before Paul was lbw.  We continued to lose wickets at about 10-15 run intervals for the next few overs, as Debasis shelled the pavilion twice with pulls as well as driving and cutting with authority.  Adam, Jeff, Graham Bruce and the captain all avoided ducks but went for single figures; Debasis reached his century and then was caught by Sean at first slip – a fine catch – for 109.  Stuart joined Jason but our local hero holed out to midwicket; Joe and Stuart are at the crease and it’s 171-8; can we get the extra 19 runs for victory?  Denis Chamberlain bowled some skilful deliveries that kept low to the turf, but Stuart managed to work two of them behind square for fours and the goal is becoming more plausible.  Stuart brought the scores level and Joe cracked a lovely boundary to get us to the target – the pair of them looking much calmer than the rest of us felt.  A great match. 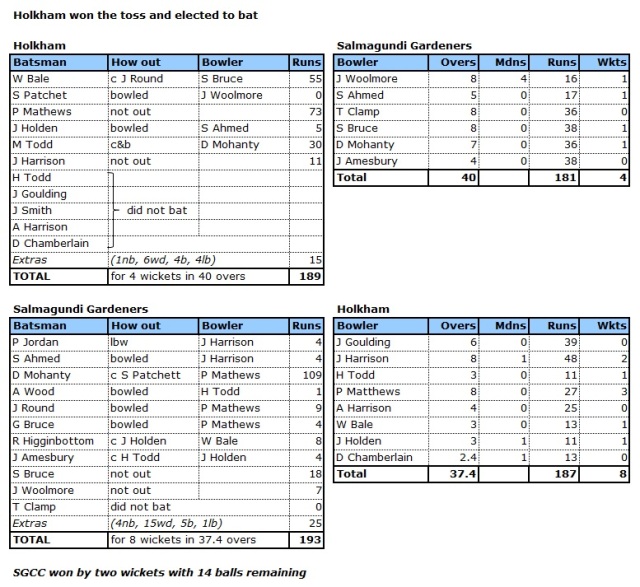 Paul Jordan and Richard Higginbottom are ready for action as Tim Clamp propels another delivery down the wicket; unfortunately none of us own the Rolls Royce in the background