Woke up in Wells – we all slept pretty well.  The Bruce Brothers surprised The King Of The Night-Time World with their general knowledge (the Jordan hypothesis disproved: “A pair of idiots”).  Top quality breakfast in Wells then a tour of North West Norfolk until we got to the college late morning, grabbed some coffee and food and Richard lost the toss; not a bad result though, as he was planning to bat and was asked to do so by home captain John Dudley.

So here we are again faced with accurate opening bowlers; David Hollingsworth has joined us and is opening the batting with Stuart; Milhan and Jones keeping it tight, assisted by sharp fielding.  Thorley and Barrow took over and the latter offered a bit of scope for advancing the score, which Stuart leapt at possibly too greedily, first nearly running 2-Bats out and then running himself out – though in mitigation, it was a fine piece of fielding by Thorley to throw down his stumps from a considerable distance.  Debasis got into gear pretty quickly and the pressure was now getting reversed though we suffered a blip when Dave was caught off Thorley trying to move the score along.  Roger McCann has also joined us and he was looking solid until he got a pearler from Thorley to rearrange his timbers.  78-3 and Joe dealt with Thorley whilst Debasis took the long handle to Barrow and Dudley; Joe then beaten by Thorley who shortly after caught Adam off Dudley – meaning that he was involved in all of the first 5 wickets.  Debasis then fell to Dudley, offering a return catch.  Richard promoted Graham and Guru to accelerate the run-rate – that didn’t work – scored 3 between them.  The captain played sensibly until he clothed a long-hop to midwicket for 7 and we’re now 9 down for 131.  Duckett:  Resolute.  Jordan:  Sensible then enterprising.  Our 10 and 11 added 43 precious runs for the final wicket, meaning we had a below par but somewhat respectable total of 174 all out to defend (PJ unbeaten for his second 31 of the weekend).

A most enjoyable tea, then we’re out to try to force a victory.

A brilliant accurate opening spell from both Joe and Guru meant that the scoreboard was virtually static for the first 12 overs as Joe’s swing (in and out) and a startling number of yorkers from Guru kept the JC openers honest.  Eventually Guru bowled an off-cutter that clipped the inside of Sybil’s bat and cannoned into leg stump: 1-5.  Home ‘keeper-batsman Luke Perera went after an outswinger from Guru two balls later, Paul making no mistake at first slip and it’s 5-2.  That’s one of the danger men gone early.  Thorley – who scored 130 in this fixture last year – is now in and looking good, though he broke two bats as he was trying to move the score on today.  He rebuilt somewhat with Aspden, until Joe pinned him with a fine inswinger.  “Great, you’ve got The Cravat” said the skipper not very quietly – fortunately the departing John found this amusing.  This is G Crane’s first season of cricket, so we were a little more accommodating at the behest of our hosts.  Until he clouted Stuart through mid-on for four, which concentrated our bowler’s mind wonderfully, bowling him for 8.  54-4.  Roger had replaced Guru by now and was bowling neatly, Thorley belting him to the boundary a couple of times, but he hands out this treatment to a lot of good bowlers.  However, the Ulster maestro got one that shaped away a little (far from his stock delivery), Thorley chased it and the skipper managed to cling on one-handed behind the sticks.  We take drinks at 6, there are 20 overs to play and the home team still fancy their chances until a mishit from Barrow narrowly evades our fielders, a hurried single is attempted and Debasis throws down the stumps to complete the run-out; note here to all players – run your bat in!  We all figured that had Barrow done this, he would have got home comfortably.  Debasis continued to bowl a very tight line, removing Jones for 9 and Milhan (who had played some exciting shots) for 10 before having Abdul-Rehman plumb lbw for a duck.  Graham and Nick were invited to take the final wicket, and both came close many times.  Stuart and Joe returned to attempt to finish the game, but skilled defence and watchfulness from Manu (22) and Blanchard-Lewis (1) left us with one wicket still to get when stumps were drawn.  An excellent game, and we had to salvage in similar fashion last season, so honours very much even.

Post-match weirdness: we repaired to the Student Bar for a drink and they closed it down owing to “excessive demand”.  Perhaps I have now heard everything.  A tired and weary team insisted Richard switch off his “yacht rock” (how dare you!) for the bus ride back to Stevenage.  Thanks to all who came, it was a lot of fun. 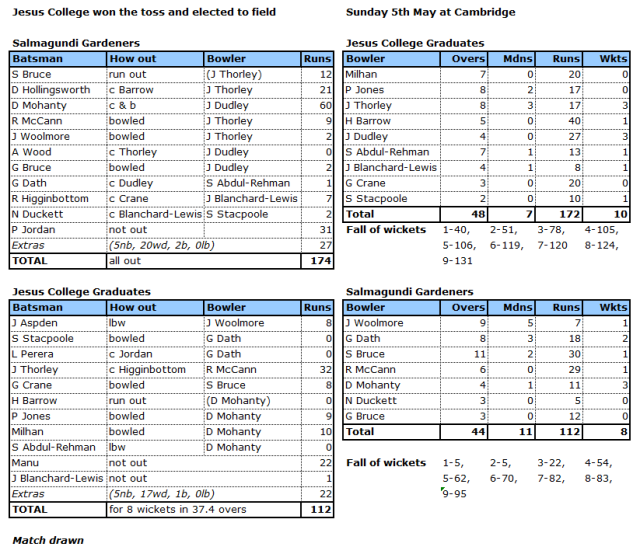