The first five days of Dave Stead’s ride from London to San Sebastian saw him accompanied by Richard Higginbottom and “Crazy” Paul Oberg.  This is Richard’s journal.

Saturday 29th May.  The day dawned warm and sunny as the three cyclists met up at Kings Cross.  As for most cricket matches, Dave was 10 minutes late – but with 120 km to cover, that was insignificant.  We trundled through London missing various turnings and adding extra distance (that 120km should have been closer to 110) – so Richard’s route planning proved to be as successful as his early season form for the Gardeners.  The clouds gathered as we hit the outskirts of London and it started to rain as we scaled Biggin Hill – not bad timing for lunch.  Paul’s a vegetarian but the pub figured that (a) Tuna and (b) Scampi were OK for veggies.  Paul had to make do with a small baked potato with cheese and beans.  During our stop the heavens had opened and soaked the contents of Paul’s not-very-waterproof luggage.  We donned waterproofs and pedalled on through torrential rain to an excellent coffee shop in East Grinstead.  The rain eased slightly and then stopped as we approached Lewes.  We then opted for the main roads only to find it was a newly constructed dual carriageway with poor provision for bikes.  Richard couldn’t get off there fast enough so pedalled like a dervish until he found the sanctuary of a good quality new cycle path.  Unfortunately Dave got a puncture and he and Paul (without mechanic Richard) took a while to repair.  We at last reached Newhaven’s Harbourside inn at 8.55 pm just in time for Dave and Richard to order sea trout and Paul to get some pizza – which turned out to be a child’s portion.  Crummy room, malfunctioning shower, no breakfast at hotel.  Oh well at least our bikes were under cover.  The 80s disco was quite a laugh.  Only one punter in for that it seemed.  They’d better reconsider their Saturday night offerings.

Dave and Paul relax to the sounds of Black Box at The Harbourside Inn, Newhaven

Sunday 30th May.  Pedalled around the harbour to get to the ferry terminal.  Nice big boat with good sized lifeboats was reassuring.  Dave got talking to a solo cycle tourist whose nasal tone immediately set Richard’s nerd sensor twitching (Richard has to guard against frequent bouts of anorakism himself).  We were all quite impressed with “Boring Bob’s” attention to detail with meticulous route planning, all the right kit, campsites ready booked, expected times, etc.  However we gradually realised this was also the result of having no social life and he stuck to us like a limpet.  Richard went for a walk around the deck in cold blustery conditions as Bob (by now we were calling him that to his face) gave him a headache.  Whilst wandering about aimlessly Richard bumped into Dave who was taking a long route to get to the restaurant for lunch.  Having picked up some food for the three of us we returned to find Paul with his head in his hands, Bob regaling him with the appropriate gear combinations to use for a trip from Bognor Regis to Gillingham.

Bob gave us some excellent advice about the best route to take on leaving the ferry.  We deliberately went the other way which cost us in terms of time and effort but at least we lost Bob who was also Rouen bound.  Never did find out his real name.

Onto the D3 out of Dieppe and after a series of uninteresting wide roads with bad surfaces we descended into the Scie valley – a real delight as the road wound around the exceptionally clear Scie river.  Slightly more hilly than expected but we were ready for it having had 4 hours rest on the ferry.  The sun came out and we were the heroic cycle tourists a l’angleterre.  Stopped for coffee at Auffay where Richard took a look at Paul’s front gear change as it “was making a funny sound” (technical for Paul).  Richard released the nut to adjust the cable – and the cable came away in 2 pieces.  Richard set Paul’s gears into the lower set and tied off the cable.  Didn’t really make much difference to Paul’s progress.  Continued through more well kept villages – Clères most noteworthy with lovely half timbered buildings and covered market place.  Arrived in Rouen at 8pm; new business hotel was fine and we went to dinner in the Vieux Marché at 9pm.  The local council have totally messed up by erecting a most hideous monument / cathedral to Joan of Arc in the square ruining the medieval feel of the city.  We thought about burning the building down (an homage to Joan of Arc herself and the English army who torched her).  Back to the hotel via the red light district where Paul impressed us with his restraint.  74km in the day, 194km running total.

Monday 31st May.  Used the road parallel to the bank of the Seine for the first 12km – whizzed along on good new tarmac.  Missed a turn for what Richard expected to be a bridge but what was in fact a (free) ferry.  Picture below shows Paul and Dave grinning at our good fortune.

Dave and Paul cross the Seine at Rouen

A further short spin through some chemical factories (cough splutter) then a 3km climb out of the Seine valley with an industrial landscape.  Lowry would have appreciated it.  Countryside improved considerably with a number of descents and climbs to our coffee stop at St Ouen.  An old fellow who seemed nuts to me and Dave (Paul thought he was normal) told us we were headed in the wrong direction for Le Neubourg.  Actually we were OK though we did enlist the support of a glamorous middle aged woman who invited us to follow her.  She was slightly too old for Paul (though she’s in Richard’s catchment age) so we thanked her and pedalled on to lunch at Le Neubourg where a superb café was found and we entertained the locals by sitting outside in cool, cloudy conditions with an angle grinder blasting away nearby.  Landscape flattened out after passing through the Ricle Valley and the ride concluded with a gentle descent to the elegant old town of l’Aigle after 105km (aggregate 299km).  Checked into the Hotel du Dauphin – rather grand – probably a bit too good for the likes of us but Paul was talked into it by the delightful receptionist.  After a couple of Pelicans du Pelforth we ate in the hotel’s Brasserie where captain Steadley took on two main courses (the Salade Niçoise was the biggest in all of France).  Richard renewed his acquaintance with an Ile Flottante.

Tuesday 1st June.  Richard repaired Paul’s bike with a cable from a bike shop opposite the hotel and we climbed the hill out of town.  Dull overcast conditions turned to rain so Dave and Richard donned waterproofs while Paul soldiered on in t-shirt until coffee stop at Mortagne sur Pêche.  Fuelled by malt loaf (Dave and Richard) and chocolate (Paul) the rain got heavier and heavier and the cyclists quieter but showing steely determination as we ploughed on, frequently losing sight of the rider in front in the diabolical conditions.  Got to Mamers slightly behind schedule because of weather (1.45pm) and thought that lunch was not going to happen until an enterprising Vietnamese restaurant kept open for us.  Great food and (per Paul) “the best person in this town” for a waiter.  Rained even harder on the way to Ballon – but at least were on fast new roads. 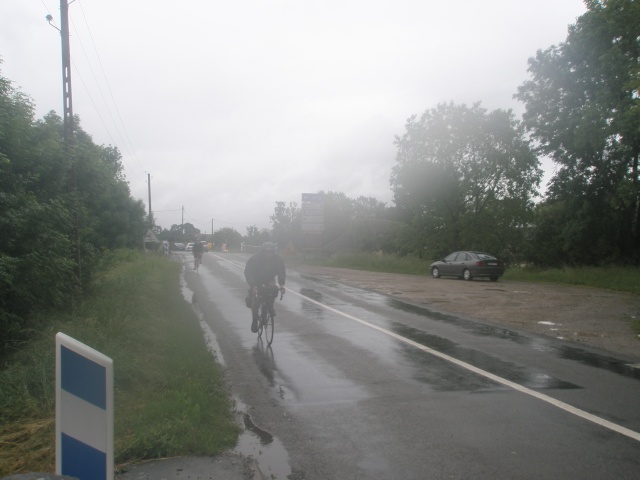 What doesn't kill you makes you stronger ...

Coffee stop in Ballon where Dave performed his best Franglais of the week.  In English (thanks Paul):

Truck driver:  “You must be very determined cycling in this weather”
Dave:  “Dieppe”.

Maybe you had to be there ….    Back onto the road and the weather at last eased off as we descended into Le Mans.  Paul did a brilliant impersonation of a tram by slotting his bike into a tram track outside the hotel.  Miraculously kept on his feet, instantly abandoning his bike (he has no respect for cycles).  Stayed in the most enormous room providing ample (and much needed) space to dry my soaked kit.  A welcome bath, then Paul got his wish as we ate at a pizzeria with our only experience of a charmless (but at least efficient) waitress.  Room was too big for Richard who hardly slept at all (like being in an airport departure lounge).  So planned the next day’s route and reflected on the 104km travelled that day and the 403km aggregate distance.

Wednesday 2nd June.  A cool and dull start as we followed the tramlines (hoping that Paul would repeat last night’s acrobatics) until we crossed the river and headed uphill away from the valley.  Nondescript small towns gave way to open countryside and then we crested a hill and pedalled on a Roman Road with no bends for 9km.  Stopped for coffee at Le Grand Lucé where it was market day.  Dave considered buying a pair of short baggy trousers from the stall by our table but regrettably decided against.  “Would make you a fashion leader in Pontefract” advised Paul.  Roman roads continued all the way to lunch at l’Homme meaning Dave and Richard got to practice going up and down through all the gears whilst Paul wondered why he was suddenly a long way behind then shortly afterwards miles in front.  The sun came out and the mercury crept up to around 25C.  Summer again!  The Creperie at l’Homme was superb – all three of us having a galette for main course and a crepe for dessert.  €35 the lot. 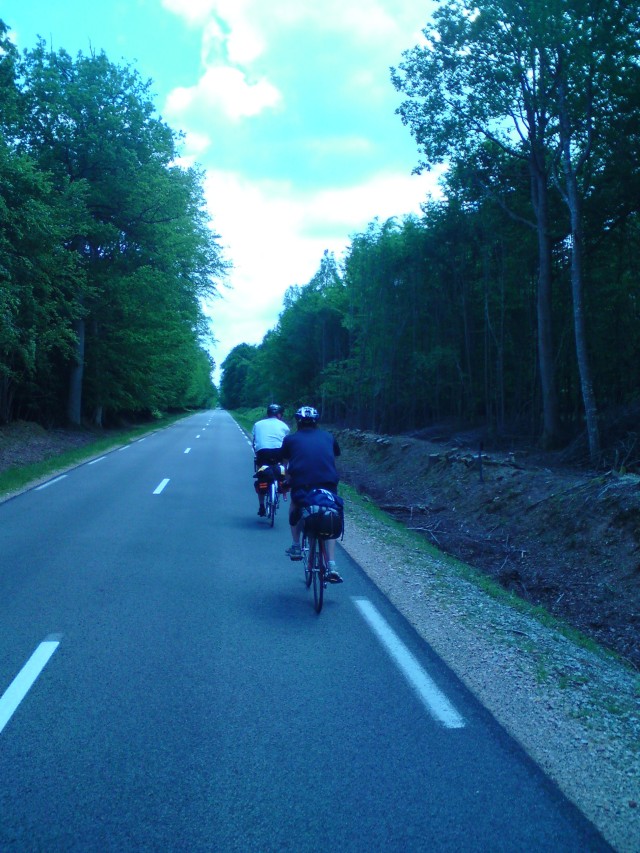 The Romans came this way first ....

Remained fairly flat from l’Homme to Tours so we got there with lots of time to spare to secure a hotel room … not!  We found that all the rooms were booked and (not having a woman pregnant with the son of God in the party) we couldn’t even get refuge in a stable.  So the Tourist office found us accomodation in St Avertin, 6km South of Tours, at what turned out to be a cheap and cheerful motel used by commercial travellers and students.  Decided against travelling back into Tours so had to obey the 10.30pm curfew in the village.  98km in the day / 501km tour.

Thursday 3rd June.  Richard up early and ran a tyres / brakes / gears / lube service on all three bikes before breakfast and then left Dave and Paul to cycle into Tours to get the train to Paris.  Locals very friendly – many hooting – as Richard took the wrong turn and used the Autoroute to cross the two rivers to get back up into Tours.  Never cycled on a hard shoulder before and don’t intend to repeat the experience.  Trains predictably ran to time and Richard was back in Stevenage by 4pm leaving Paul to continue to Limoges with Dave before Dave went solo on to San Sebastian.  Bon chance mes amis.  Thanks for a great holiday. 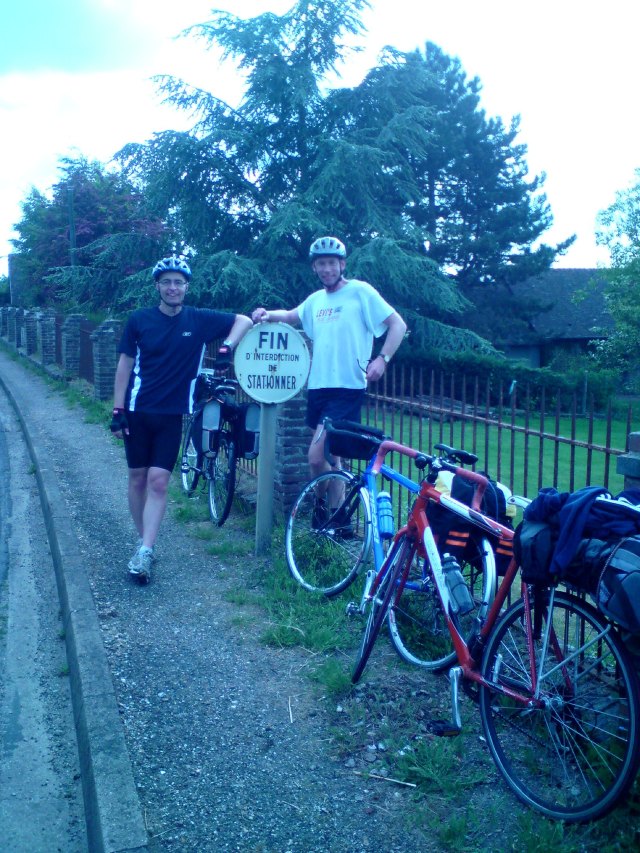 For you Richard, the tour is over ...